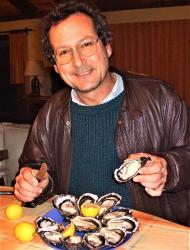 Achim Janke has worked in aquaculture R&D for the past 30 years. After managing the Cawthron Institute's Glenhaven Aquaculture Centre and its oyster programme for almost two decades, Achim moved on to become an international consultant for hatchery biotechnologies in 2013. Achim's main passion no doubt is shellfish, and oysters, in particular. His new role as independent consultant allowed Achim to start promoting the TOPS Oysters™ system internationally, the system he invented and developed jointly with leading industry partners in New Zealand.

For Achim it is about producing the perfect oyster. And for him, a perfect oyster is an oyster full of glycogen housed in an attractive shell. Taste, of course, is another important attribute. According to Achim, producing a perfect oyster and celebrating the differences between top grade products, is something the TOPS Oysters™ growing and marketing system can provide like no other. While worldwide promotion of TOPS Oysters™ is only just beginning, he hopes that his work will gain traction soon. And Achim won’t need to do this all by himself. His son Niklas is following in his footsteps.

For Niklas Janke, the marine environment is his life' s passion and the oyster his world. Graduated in Marine Biology and Aquaculture Sciences at the University of Tasmania, Niklas fitted in a semester at Colorado State University/US to complement his degree studies. But good scientific knowledge is only of use in the world of R&D if it is matched with profound practical hands-on knowledge and skills. Niklas acquired his work experience in oyster aquaculture by working with leading oyster companies in NZ and AU. This included Waiheke Fresh Seafood and Marlborough Oysters with whom the TOPS Oysters technology was originally developed.

Niklas has recently set up his work base in Portugal where he is promoting the development of innovative oyster production technologies and leading the commercialization of the TOPS Oysters technology in Europe. 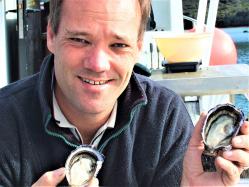 It is no surprise that Aaron built MOL within a few years to become New Zealand’s largest grower of intermediate size oysters. Aaron, together with Moana New Zealand, has played a critical role in the development of  hatchery based single-seed oyster aquaculture in New Zealand  based on technology (selective breeding and 3N technology) developed by Achim. These developments have helped New Zealand's oyster industry survive the crisis provoked by the emergence of the Oyster Herpes Virus (OsHV-1)  in 2010 (see reference). 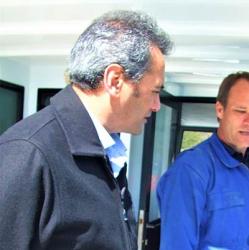 Aaron and Achim acquired a marine farm in the Marlborough Sounds for the development and fine-tuning of the TOPS Oysters™ technology. Unfortunately, abundant natural spat fall of mussels in the following years affected this site's suitability for oyster cultivation and led to a shift of the TOPS Oysters™ production towards more suitable waters on the North Island of New Zealand.

Pacific Marine Farms (PMF) nowadays called Moana New Zealand under Aotearoa Fisheries Ltd (AFL), is one of New Zealand’s leading fisheries and aquaculture companies and the largest producer of Pacific oysters. AFL is the third partner in TOPS Oysters Ltd and has been instrumental in recognizing the marketing benefits of the TOPS Oysters™ technology.